I didn’t really think to much about this part of our trip when it was all arranged. Didn’t really speak about it until we got there either, as all my focus was on climbing Kilimanjaro. But when i did think about it i imagined camping in a tent but in some sort of safe campsite out the way no big deal, just assuming it would be fenced in and guarded. Well this taught me never to assume….. ha ha.

On route to the Seronera campsite we viewed loadz of amazing animals. We actually saw the most beautiful lion i have ever seen. Turned around the corner and the jeep stopped that was it. We were at the campsite! SHIT….. Was the word which sprung to mind! They chucked us a orange cloth tent and said pick where you want to put it. There was a large open space and a basic facilities block with a male and female toilet and sink! I went straight to check these out, there was a huge spider in the corner next to the toilet – Scared the hell out of me…. No fence, no security – just us! This was mental….

My husband erected the tent in 5mins wasnt alot to it, all i could think of was that lion we had just seen. Well our guide and jeep drivers cooked dinner for us which was delicious. We had a few glasses of wine. My aim was to drink as much as i could so i wouldnt hear a thing during the night. We were all tired after a busy day and early start and everyone started heading off to bed. We were told not to go the toilet in the night alone and to make lots of noise, so if there were any animals about we would scare them and hopefully they would scarper….

We headed over to our tent just by the light of our headtorches, it was dark at this point. And we just saw all these reflective eyes in the distance. I paniced and couldnt settle for ages even after the copious amounts of wine i’d drank. All night all i could hear was hyinas howling. Dont think i got much sleep at all. I was waiting for the light to shine throught the tent so i could get up, but it was a blacked out tent, ha ha.

My husband woke and didnt hear any of it – typical man! But to my horror behind the tent was about 6 buffolos all sat in the grass.

This was the scariest night ever, but one i will remember forever…. 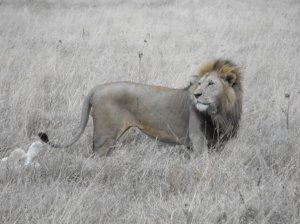