The last part of our epic honeymoon adventure, we spent five nights in a remote, idyllic getaway on the Caribbean Coast. This was just what we required after the tough climbing trip in the Ecuadorian Andes!

We took a two and a half hour bumpy bus ride from the cosmopolitan Panama City through rural villages to meet our boat at a tiny port in Miramar. The resort is then only reachable by a forty-minute boat ride from the mainland; exciting was not the word, as the boat crashed against the waves as we were watching out for the flying fish jumping alongside the boat. Getting there was an adventure in its self!

Set in a striking, pristine environment on the fringe of the unspoilt San Blas Island archipelago and the cultural heritage of the Kuna Indians. The beach islands were also used in the Survivor TV show!

As we approached we could see the stunning over water bungalows and the attractive bay of white sand surrounded by think mangrove rainforest – what a sight, Wow!

It was an exclusive, eco lodge resort called ‘Coral Lodge’ set in a stunning natural habitat. With only six, over water thatch roofed huts – which meant only 12 guests max could ever be staying at the resort. Each hut had an en-suite, air conditioning, Jacuzzi and its own double hammock on the front deck and stairs directly into the water for you to snorkel or even swim in the warm, clear ocean waters. You also had your own kayaks docked to your hut to use whenever we liked– Amazing hey!

On arrival we were greeted with a refreshing cold coconut cocktail and shown around, whilst our bags were dropped off at our hut by the boat. This didn’t take long as it was basically just a beautiful beach, pool, over water restaurant and a main restaurant and bar area.

Breakfast was served daily at our requested time for us to enjoy on our front deck of our hut, looking out to sea as the sun was warming up. We kayaked over to the beach to eat lunch and dinner at the resorts main building, which also had a freshwater swimming pool alongside the beach perfect for a refreshing dip after lunch. Evenings were spent eating; drinking and watching the sun going down mainly. 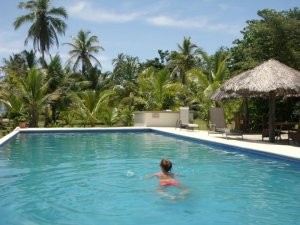 Food was all sourced locally, fresh on the day. We mainly ate seafood (clams, octopus, white fish and lots of ceviche) and drank cocktails and champagne – typical Brits turning to alcohol when completely isolated! Ha. We didn’t get a choice or menu it was what we were given. We were asked to fill out a preference sheet on arrival of foods we liked and didn’t like though… 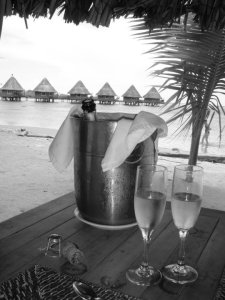 After a few hours, you feel totally isolated and away from it all! No TV, Internet and if your lucky you have electric as everything is run by solar power. A good tip is to have a shower in the afternoon if you like it warm otherwise it will be cold! It’s a strange feeling being isolated and quite hard to adjust too.

I felt like I was in Jurassic park, it was so green, uninhabited and all the wildlife seemed to have been magnified by ten times!

Our first few days consisted of a ‘Craig’s magical mystery tour’, my husband would make up a tour for us as we kayaked out to sea and then through the deep mangroves. I soon dropped out of this when I saw a few pretty big fin’s splash out of the water. This freaked me out considering how tropical this place was! He then went solo hunting for so-called sharks, ha. I resorted to the picture perfect beach with a good book!

We did also go monkey trekking with a native Kuna Indian, which worked at the lodge, this turned out to be unsuccessful due to the two other people with us being too noisy. One of then had a limp and kept dragging their leg through the rustling leaves – not ideal! We enjoyed trekking through the rainforest though, as our guide macheted a path ahead, even though we didn’t get to see any monkeys!

We arranged a visit to the Kuna museum located on ‘Ailigandi Island’, it was small and not a lot to it, but Mr. Roy Cortez kindly showed us around. It was interesting and very informative, how this one man has decided to document the Kuna culture. After a quick visit, we headed to another inhabited island to have a quick look around which was very busy, a real social atmosphere. Lots of shops and locals huts all jammed close together total contrast to the previous islands. We hand-picked and bought some fresh crab to take along to the next island to have for lunch and a lobster for our evening meal. A crazy, but cool experience!

We spent the afternoon on ‘Cainora Island’ an Kuna family’s beautiful sand island snorkeling, swimming and soaking up the sun. They kindly cooked our crab for lunch for us too in a tiny thatched hut. It was absolutely an amazing day enjoying the simple things! You could walk around the sand island in about ten minutes. It was so picturesque! 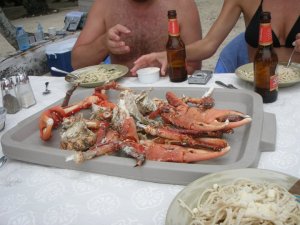 We were running late getting our boat back to ‘Coral Lodge’ and it was just past 5pm. The Kuna people are usually timid, friendly and welcome tourists. But there is a lot of drug trafficking in this region; using small fast boats just like the one we were travelling on coming from Colombia delivering drugs to the mainland (the direction we were heading towards). An intimidating looking black boat soon stopped us with about four huge speedboat engines on the back, with six guys standing wearing black balaclava’s. They had an abrupt conversation in what seemed to be Spanish with our skipper, luckily he was a native Kuna Indian and explained we were late returning and they soon let us get on our way. We later discovered this was the local police patrolling the waters for drug traffickers, tourists aren’t meant to be out on the waters after 5pm and we could have been easily mistaken and shot at – Eeeek!

All things considered this part of the world is as close to perfection as tropical can get, a true hidden gem waiting for you to discover. Don’t tell too many people though! A perfect end to our perfect honeymoon… 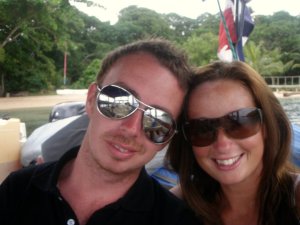