The latest travel headline stories from around the world…

All major tourism attractions closed, due to terrorist attack alert. The great pyramid of Giza, the oldest of the seven wonders of the ancient world is totally deserted, since the uprising against the president Hosni Mubarak. Egypt’s tourism is taking a major hit and tourists have fled! All travel to Egypt even the red sea resorts have been advised against by the foreign office due to the increased risk of terror threats to find out more see the foreign offices report: –  http://www.fco.gov.uk/en/travel-and-living-abroad/travel-advice-by-country/middle-east-north-africa/egypt

Two weeks after hurricane Sandy hit, Cuba’s Santiago province is now a disaster area. 15,000 homes damaged and 11 people killed. Eastern Cuba is struggling to come to terms with the destruction, financial strain and the damage to the tourism industry this will cause. The UN has sent emergency food aid to Cuba. There is currently no travel restrictions in place set by the Foreign office despite the damage caused with approach to peak holiday season in the Caribbean. For travelling advice check out this link: – http://www.fco.gov.uk/en/travel-and-living-abroad/travel-advice-by-country/north-central-america/cuba

First commuter train of its kind since independence in 1963, the train will link the city and the suburb Syokimau, where Kenya has built its first railway station in more than 80 years. The 10 mile train ride is expected to take 15 minutes, where as a car journey in rush hour traffic can take up to 2 hours. It was built at a cost of about £200m. To read more visit http://www.bbc.co.uk/news/world-africa-20310767

Kenyan president Mwai Kibaki at the official launch of the Syokimau Railway station.

Highest water levels in 160 years due to the ‘Acqua Alta’ (high water & exceptional high tides) have been particularly severe in Venice this year. The city is currently 70% underwater! The Foreign office has placed no restrictions on travel but stated ‘Venice is subject to flooding’ pretty obvious I think from all the press. To read more and see pictures about the current situation click here: – http://www.guardian.co.uk/world/2012/nov/11/venice-floods-high-water-italy 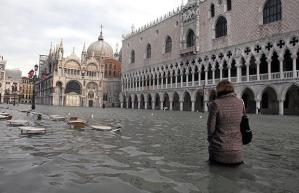 Japanese currency the ‘Yen’ dips to the lowest of 80.83 against the US dollar in over 6 months. This is due to Prime Minister ‘Yoshihiko Noda’ proposing to dissolve parliament and hold a snap election. Analysts report this would weaken the Yen yet even more if it was to happen. The proposal for the sudden election fears that Japan’s economy may be heading back into a recession. To find out more: – http://www.bbc.co.uk/news/business-20335142